In the fall of 2018, #MeWeSyria were invited by our partner Questscope and the British Council to lead a 5 day combination and trauma-helaing session for a group of 15 Syrian leaders and refugees in Berlin. During the week, Syrian leaders, for the 1st time, engaged in #MeWe exercises on breathing, goal-setting, trauma-healing, communications,  perspective taking, and leadership development. #MeWe led the sessions with experts Michael Niconchuk from Beyond Conflict, and Justine Hardy, for Healing Kashmir. Check out this article and photos from Pass the Crayon, who participated in the event… 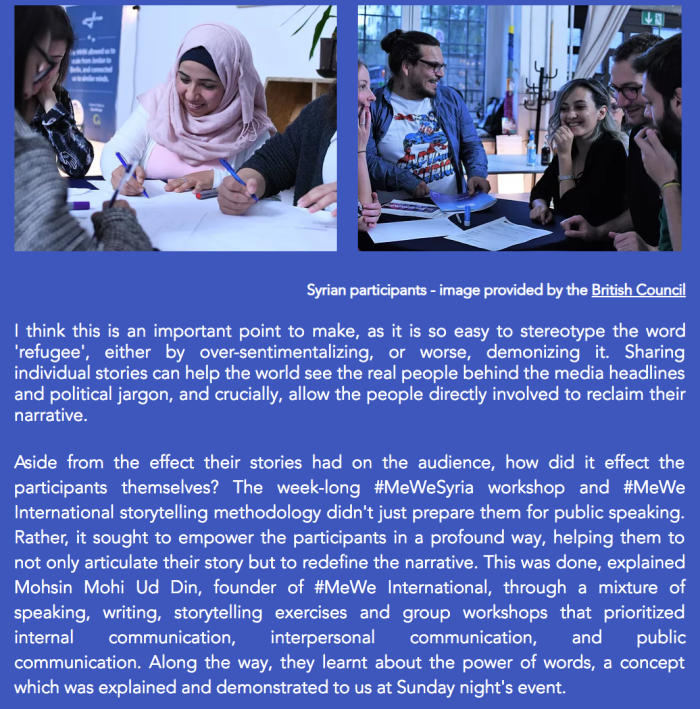 Amr is a young Syrian I trained when bringing the #MeWeSyria program to #Turkey . As a Syrian refugee recently resettled to Germany, Amr carries with him hope, innovation and storytelling for changemaking. We were able to get Amr Raslan to represent our #MeWeSyria program at a special event co-organized by Ashoka Germany called the #HelloFestival that is gathering social innovators from Ashoka teams and Ashoka Fellows to collaborate on how to scale up approaches for supporting refugee communities in Europe. Thank you Amr for bravely bringing a Syrian youth perspective to this event. Proud of you! #ici2016

As part of Kai Wiedenhöfer’s photo exhibition opening at the Federal Foreign Office in Germany this week, #MeWeSyria will have its own wall showcasing 1 of the Syrian-made storytelling pieces from the #MeWeSyria program which is now operating in Jordan and Turkey. The #MeWeSyria peice on exhibition–which is housed in the German government’s Foreign Office–was written and produced by the Syrian’s inside Zaatari refugee camp with the host NGO, Questscope.We are connecting the voices, ideas and changemaking of young Syrians in Zaatari to otherwise closed-off spaces. Special thanks to the Foreign Ministry of Germany for the opportunity.

Brave young Syrian ‪#‎refugees‬ from Darb Organization share what we have been up to w/ my ‪#‎MeWeSyria‬ program in ‪#‎Turkey‬ & their insights on how/why to make positive change and spaces for expression. They have been through unspeakable hell, and yet here they are fighting for hope, humanity, peace and community building. Watch below…

Storytelling is the way we activate and transfer the fire, energy and hope of human experience. It is the oldest gift we, as human beings, have. It is a tool for reflection, understanding, creativity and changemaking. This is why the MeWe youth storytelling initiative is so powerful, as it aims to amplify the storytelling capacities of disadvantaged youth worldwide.

#MeWeSyria is coming to California State University on 22 April. The interactive panel will include a screening of some of the young refugees’ stories and messages, and a discussion on the power of storytelling for youth engagement and social development.

Hope to see you there! 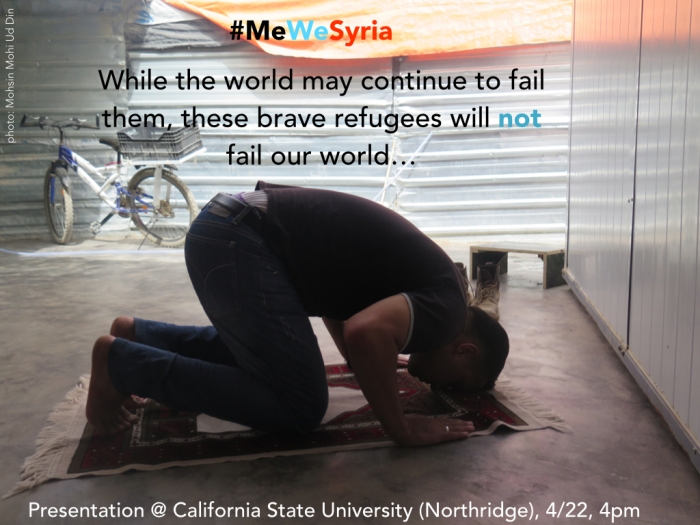 Mac lap tops I purchased for my project with Syrian refugee youth arrived today. These will be used for the communications/arts workshops with the kids, and will be donated to the refugee youth so that they can keep creating and innovating.

In particular, i-Movie and Garage Band will be used for the film editing and music workshops. Technology can empower change and inspire creative solutions.

To help cover transportation and other equipment costs, I am asking your help by donating what you can online, here:

(The purchase of this technology would not be possible without the support of the German Government.)

There are today over 1 million child refugees from Syria. Many of them are living in camps and ghettos in already fragile countries like Lebanon and Jordan. It’s pure madness what these kids are forced to endure. The world so far has responded with a lot of talk and no solutions. Thankfully, countries like Jordan are doing what they can to temporarily protect refugees fleeing the 3 year civil war near its border. Many of the young refugees lack spaces for self expression, communication and hope. That is where this project comes in. Over the past 4 months, I have been in talks to implement my arts diplomacy workshops for Syrian refugee children in Jordan. In previous years these workshops have empowered youth in Morocco and Kashmir. (My project was originally developed and carried out as a Fulbright Scholar in Morocco in 2009. Without the Fulbright, this would not be happening today.)

It has not been easy as I am but an individual with no money or high-level connections. Through some research and nauseating persistence, I have secured the necessary support I need from the German government and the United Nations Alliance of Civilizations. The communications/arts diplomacy project is being funded for 40 days and  I am happy to say that I will be departing in May. UN agencies and local NGOs near the border of Syria are starting to take interest in my project.

I am motivated, scared and may be a little in over my head, but I know that some of the child refugees, may be not all, will take this project and run far with it. THEY will teach US all of tragedy, hope and resilience. It is intended that the project will leave with the kids skills in new media and communications. They will learn how to work together, develop creative projects about the world as they it around them, and express the ways in which they want to change things. The end result will be an archive of short films–written, directed and acted by the refugee youth.

It’s not about politics. It’s about empowerment… it’s about hope… it’s about moving mountains in a landscape of despair. Getting clearance to work in the camps has proven quite difficult. While this is in a holding pattern, I have identified local groups in towns outside the camps where my project will take root. Most of the Syrian refugees are in fact living outside the camps and enduring poverty, heart ache and lack of any hope.

Please follow this blog if you want to follow the project and connect with the refugee youth. Updates will be posted here and on my twitter handle: @mohsindin.

While researching #Syria through art, I discovered a powerful sketchbook of Joumana Ismail that tells the story of what people are going through in Syria. If you don’t know how bad it has gotten in Syria, take a look at this Vine video I took of Joumana’s sketches…