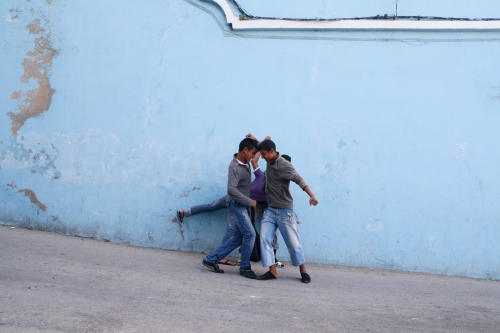 It has been quite the week. As I mentioned in my previous post, the music and arts initiative I started for orphans and street children has grown to incorporate not only the children’s centers of Darna in Tangier and DarLekbira in Kenitra, but I am now also dong workshops with ASCMP Drug Clinic in Tangier as well as with Association: 100% Single Mothers. I am in awe of the dedicated, selfless youth activists and community activists who run these grass roots organizations and it is indeed an honor to work with them.

On Monday I started the second semester of my music and arts initiative at Darna, which supports street children and children living in extreme poverty. I am leading music workshops every Monday. This past Monday I began teaching the kids music literature and how to read drum patterns. Like most classes, the students were afraid and many lacked confidence in trying out something alien to them. But with a little push, the kids came through and we got off to a superb start.  I had a good laugh when one of my students expressed her dislike of rock music, but that she can handle “With Or Without You” by U2. Tuesdays and Thursdays I continue with my photography-film workshops with 2 different groups at Darna. In these workshops I have the kids  develop their own short stories based on any topics they choose. In my lecture I state that in the world of music and art there is no wrong answer. You only have to express what you feel. The only requirement is that the short story they develop must have a message. Once the class agrees on a story, one group of kids handles shooting the images with our digital camera and the other group acts in the film. I then edit the photos into an animated short.

This past Tuesday’s class was, well, grueling. I had to kick one student out. Not all the students were interested and they were easily distracted. If one showed a little interest in the project, the others would hit or make fun of him. So I said we will shoot an action film and fight sequence today. They then got interested. We then developed a story about pick-pocketers who get into a fight with some good samaritans. We had a blast. In every workshop I do, there is always chaos and uncertainty. But the key is not to let up, to keep momentum and not get discouraged. Tuesday’s group were violent and disinterested in the beginning. But as soon as the creative spark was attained, we hit the ground running. There is a moment in every workshop one can tell whether or not it was a success or a failure. Upon shooting the story, all the kids gathered together around me and we watched what we had collectively created, and we were smiling and jumping and laughing. Success, even though one of my students kept trying to steal my Ray Ban sunglasses 🙂 Thats the goal of all of this though: To inspire, to create, to get these kids, who endure tremendous pressures, to smile and have the space to breath.

Thursday I had my other group at Darna. The arrangement of my classes was disorganized since my students schedules are not finalized as of yet. I was lucky on Thursday to have 3 of my students from June participate on Thursday’s workshop. One of my students Adil, who was in my classes earlier this year, lead the group and really displayed not only his acting potential but his leadership qualities too. The start of class was slow as the kids were scared to put forth ideas of a story to shoot on camera. The kids put forth an idea of filming a gambling scenario that breaks out into a fight. I reiterated that we need a story with a message. So I asked the kids why was there gambling which turned into the kids describing the problems they see in the streets: drugs,poverty, begging, hunger, fights. We developed a short story about a boy who is not into school. He falls asleep in class and has a dream where he runs away from home after getting into a fight with his mother. He falls into drugs, begging, and gambling. After quitting school the boy gets involved in a gang and after a fight he gets arrested and put in prison. Once in prison the boy wakes up in class. The final shot is the boy reading a book, looking out at the Straits of Gibraltar. The creative energy in this class was magnificent. My students and I were running from here to there, shooting the movie, intoxicated with excitement over what we were creating. Again, confidence grew, teamwork was solidified, and so did inspiration at exploring new ways to express their ideas and experiences. This is the first short film in which my students directly depict the challenges they face on the streets on Tangier.

Friday I took a bus to Rabat, then a train to the town of Kenitra to see the children at the DarLekbira Association. Since working and spending time with the youth since January, we have developed a mutual relationship of trust and respect. I love these kids and feel a deep responsibility for them. These children often are abandoned by their families, have been made to beg on the streets, have been sexually abused, and constantly struggle with extreme poverty. Like Darna in Tangier, the association DarLekbira in Kenitra provides shelter, counseling, clothes, medical care, and schooling for these kids. Friday night I met  the kids and we developed a short story that followed the lives of three boys who grapple with drugs, abuse, poverty, immigration. When I asked my group how their problems will be resolved in the story, the boys said DarLekbira comes to find them. We shot the film the next day at an ‘Education Caravan’ organized by DarLekbira’s director Maroua. (She is perhaps one of the most dedicated and hardworking community activists i have ever met.) As with the other workshops, one group shoots with the camera, the others act in the film.  Saturday’s workshop went smoothly and I am looking forward to editing the film. Today I am back in Tangier to resume my weekly workshops with the children at Darna.

Somedays are good, somedays are bad, but hearing the kids laugh or seeing them get excited and inspired once in a while is always worth the search. Even more significant are the young Moroccan women and men I meet who are dedicating their lives to help the drug addicts, the poor, the abandons. These youth activists are doing so with little resources, little compensation, little attention. That is true heroism, and it these type of people that keep the light of humanity alive. We can all learn from their selflessness, humility, and dedication.